Even the name is sexy.

I’m a Star Trek fan, I know a sexy Captain when I see one.  As much as I heart Jean-Luc and his perfect bald head, he’s not exactly a “bad boy” and y’all know we girls love us a bad boy.

Mal is someone you can love and hate simultaneously.  Smoldering in one instant and frightening the next.  He’s unpredictable, he’s sweet, he’s handsome, he’s loyal, he’s tortured.  He’s intelligent but he talks like an idiot.  He was rocking the quirky half-smile long before Edward entered the nerd lexicon.  He can take care of and protect you.  He’ll take a beating for you.  He has an amazing sense of humor.  He is bilingual (yeah, yeah, I know everyone speaks Mandarin in Firefly, but whatever).  He’s the kind of guy you want to fix.  But then you don’t because he wouldn’t be so sexy if he wasn’t so complicated.  He’s not uppity like Simon, not stupid like Jayne, and not married like Wash (God rest his soul)

In short, he can throw me up against the wall anytime.

I suppose I’m a little biased when it comes to Firefly.  I love sci-fi and I love Westerns and Joss Whedon was kind enough to combine the two.  But mostly it’s because I had a totally awesome experience in 2004.  My Popi is a Foley Artist for a major motion picture company and his sound stage just happens to be next to the largest stage on the lot.  When I didn’t feel up to exploring, and got bored of watching them fake walk and jostle clothes, I would peak in to see what they were doing next door. 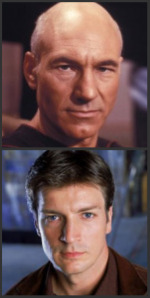 Do you like’m bald or brunette?… I can’t decide…

The Summer of 2004 was a turning point for me.  I had just graduated from college and was trying to figure out what to do with my life and how to go about doing it.  It was decided that I would begin apprenticing Foley under Popi (it didn’t stick and I left to explore other avenues).  Me, and the granddaughter of Mr. Foley himself, would hang out at different parts of the studio and watch people work.  One day we struck up a conversation with the construction foreman in the studio next door and he invited us to come in and see what they were building.

I walked up and down the main corridor.  I hung out on the bridge and talked about the construction with the people working on it.  I sat in Wash’s pilot seat.  I could have died and gone to nerd heaven right then and there.

While standing on Serenity, I could totally picture Kaylee shouting from the engine room, Jayne cleaning off his weapons in the mess hall, and Mal walking towards me with that brooding look on his face.