Nothing says “party” like a large punch bowl full of fresh blood wine.

Blood Wine is the favorite alcoholic beverage of the Klingons, a race of warrior aliens from the planet Qo’noS.  Originally an enemy of the Federation, the Klingons have been allies for quite some time.  Just don’t ask them about how their foreheads went from being smooth to wrinkled…they don’t like to discuss it with outsiders.  Traditionally Klingon Blood Wine is about twice as potent as whiskey and can’t be tolerated by most humans.  Don’t worry, this recipe (from the Star Trek Cookbook) is pretty tame.  The base recipe is without alcohol but you just feel free to add as much vodka as you want.  I added some and it was delish.

You could go out a buy a bottle of Blood Wine (I got mine at the now defunct Star Trek: The Experience in Las Vegas) but why do that when you can make your own? 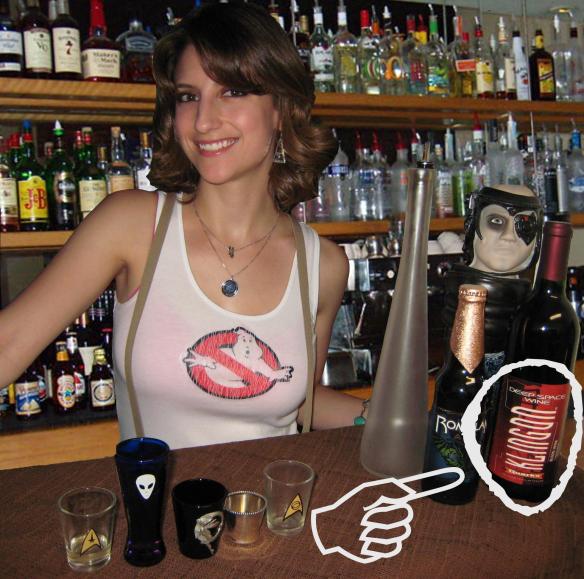 Yup, I’ve also got a bottle of Romulan Ale

So, without further ado, here is how you make Klingon Blood Wine according to Neelix:

Here’s the recipe excerpt from page 126 of the Star Trek Cookbook (sorry, they don’t use exact amounts for this recipe so just do it to taste):

“Klingon Bloodwine is exactly what it says it is: fermented blood and sugar.  To make an excellent re-creation of Klingon Bloodwine, you can use straight up “Just Cranberry” from Knudsen sweetened to your own taste with Welch’s pure dark grape juice.  If you want to lighten the color of the cranberry juice just a bit, use Welch’s white grape juice.  Want it to have some nice floating red corpuscles?  Run fresh or frozen cranberries or red raspberries through your blender (or chop them if you’re like me and you don’t want to have to clean your blender) and add them to your juice.  That makes it fresh and sweet, the way Worf drinks it.” 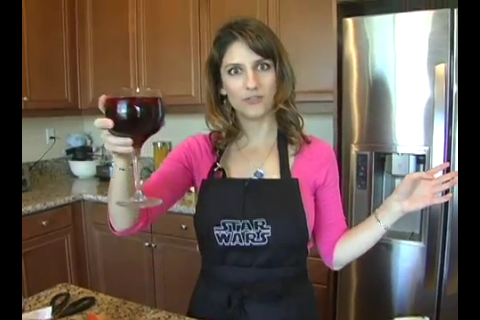 This is what happens when you drink too much of it

Everything looks better with pixels

Well, I’m on vacation in New York with a wonky internet connection (hence the lovely pixelized pictures) but it seems I just can’t quit you guys. That’s right, it’s time for another installment of Cooking with Hot Nerd Girl!

This time around I’m attempting to make Lembas Bread.

If you don’t know what Lembas Bread is then allow me to enlighten you.  It’s from The Lord of the Rings by JRR Tolkien. It’s made by the Elves and given to the Fellowship to feed them on their journey to Mordor.

When I first saw this recipe I got so excited that I only read the ingredients, not the directions.

HUGE rookie mistake and yet ANOTHER reason why HNG = epic fail in the kitchen.

At least I had fun while failing

I wish now that I had tried the recipe on the website that shows you how to make the leaf wrappings because it fits my idea of Lembas Bread better and doesn’t require special machinery that no one but the Italian Grandma down the street could possibly have in their kitchen. Seriously? A pizzelle press? Give me a break. Plus, the recipe was missing steps.  Really, it was just a disaster waiting to happen.

Anyhooters, here is my utterly ridiculous attempt to make Lembas Bread. Now where’s Tosh.0 so I can get my web redemption?

*side note: keep watching after the credits, I added a little bonus clip at the end.

So all of you who suggested that I give baking a try…now you know why that’s probably not the best idea.

Here’s the recipe from The Geeky Chef, but again, I suggest you try the other recipe first.  I think that I will try that other one just so that I can attempt to redeem myself.  I’ll let you know how that works out for me.

Put the eggs, honey, kumquats, rose or orange flower water, and nuts in a food processor or blender. Blend on high for 2-4 minutes. Add 1 cup of the flour. Blend for a minute or two. Put mixture into a bowl and add the remaining flour and the salt. Whisk or stir until well blended. Bake lembas on a pizzelle or iron about 15 seconds each or until lightly brown. Cut into desired sized pieces. Wrap in a leaf and tie with a string!

I smile whenever I'm plotting the demise of people who come up with stupid and incomplete recipes.