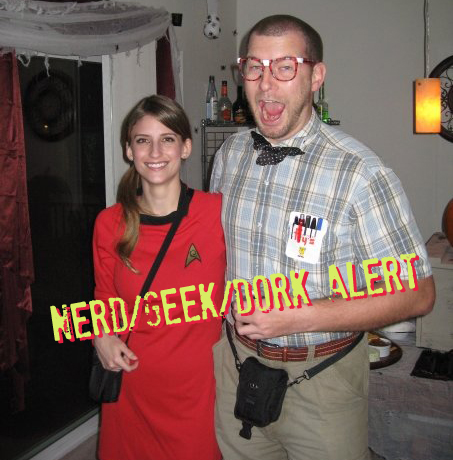 There seems to be some confusion about what constitutes a nerd, a geek, or a dork.  I weighed this very carefully when deciding what to name this blog (that I was convinced no one but my Mom would ever read).  I very nearly called this whole venture “Hot Geek Girl” but after several discussions with friends (who are also nerdy/geeky/dorky) we came to the conclusion that “Nerd” was the most accurate description of my near obsession with all things sci-fi, fantasy and comic book related.

That being said, I call myself a “geek” and a “dork” all the time.  As far as I’m concerned, all three terms are a compliment and I figure I fit into all categories in some way or another.  So this post is NOT an attempt to start a definition war, it IS an exploration into terminology that many people have very strong opinions about.

After yet another round of discussions with friends and fellow nerds, here is the Dictionary’s definition and then our definition.

2. an intelligent but single-minded person obsessed with a nonsocial hobby or pursuit: a computer nerd.

My feeling is that a Nerd is more pop-culture oriented. They like sci-fi, fantasy, comic books, etc. They can rattle off trivia with Wikipedia-esque relish and detail. They know how warp drives and flux capacitors work and might even try to build them for personal use. They have costumes, props and collectibles and have most likely reenacted at least one fictional futuristic battle. They go to conventions and convene in chat groups online to share knowledge and learn minute details about their favorite shows. They go to movies on opening day. I say sci-fi/fantasy, but really this is applies to any group. There are definitely a lot of sports nerds/geeks out there (and they are all on ESPN) but a lot of people that would qualify as a “nerd” are people that like the really out there stuff, like competitive table tennis. Which in the US might come off as incredibly nerdy, but in China, totally cool.

1. a computer expert or enthusiast (a term of pride as self-reference, but often considered offensive when used by outsiders.)

2. a peculiar or otherwise dislikable person, especially one who is perceived to be overly intellectual.

3. a carnival performer who performs sensationally morbid or disgusting acts, as biting off the head of a live chicken.

I’ve always felt that geeks were more technology oriented.  They focus more on computers, video games and gadgetry. If you geek out on things like wine, food or art, congratulations, you’re a hipster. Geeks usually own a ton of t-shirts with obscure gamer references that most people wouldn’t understand.  They are first in line when the new iPhone comes out.  There’s a good chance they play Mob Wars or Angry Birds.  They can hack into their schools database and change everyone’s SAT scores.  A lot of gamers might classify themselves as geeks but if they can’t code a game for you, they’re just a gamer in my book. And ain’t nuthin wrong with that. Typically they’re that person at the party that keeps talking because they have so much info they find so interesting and they want to share it with you very, very badly but who eventually ends up not talking to anyone and instead goes home and programs/builds something that turns into a billion dollars. This is how Facebook was born. 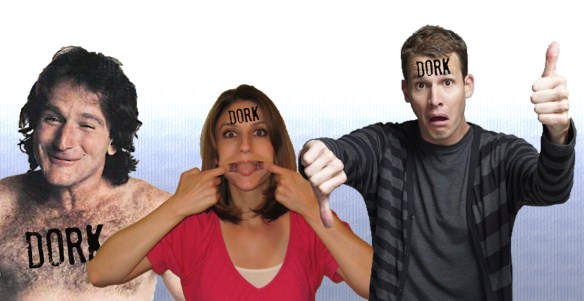 I think Dorks are just like they sound, dorky (that’s not a bad thing – it OFTEN describes me to a tee).  They tend to have nerd and geek traits, although not neccesarily.  They can even be a little socially awkward about it…like proclaiming to a room full of Ivy-leaguers that it’s not a matter of if, but when, the zombie apocalypse will happen and having them all stare at you like you just sprouted tentacles from your forehead (yes, I did that). But the greatest dorks of them all do embarrassing things sometimes but rarely get embarrassed.  They accept themselves for who they are and make no apologies.  Very similar to the coolest people you’ve ever met in your life except these guys like stuff further outside the norm, like most geeks/gamers the difference is they aren’t afraid to show it. And the best dorks eventually drag you into their silly antics without you knowing where they came from. Like Santarchy or BYOBW. Sometimes it’s to do anything that will make you laugh, other times it’s just cause they love whatever it is.

One thing we can all probably agree on…that the Dictionary is a major asshole.