October is a bittersweet month for me.  On one hand, there’s Halloween and all of the fun festivities that the holiday entails.  But October is the month when several of my loved ones have passed away so there’s also a lot of sadness.  Even though I never met him personally, the one anniversary of someone unrelated to me that I have written in my calendar is Gene Roddenberry’s.  Every October 24th I honor the life of one of my heroes, the man who created and nurtured the glory that is Star Trek.  This year in particular is notable in that it’s the 20th anniversary of his passing.  It’s uber hard to believe that it’s been 20 years already.  Even though I was a kid I have very vivid memories of the day he died.

So in honor of Mr. Eugene Wesley Roddenberry, here are 16 Facts You Never Knew About Gene Roddenberry, for your nerdy enjoyment:

1. Most people know that Gene was a pilot during WWII but are unaware that he was a civilian pilot for Pan Am after the war and before becoming a Los Angeles police officer.

2. He was involved in at least two plane crashes.  The first while piloting a B-17 Flying Fortress during the war that crashed due to mechanical failure just after take off and killed two people on board.  The second was while a passenger on a commercial flight from Karachi to Istanbul that crashed in the middle of the Syrian desert in which he was one of only eight survivors.

3. He was the speechwriter for LAPD police chief William H. Parker and modeled the character of Spock after him.

4. He had affairs with Nichele Nichols and Majel Barrett in the 1960’s during his first marriage.  He and Majel Barrett had been lovers for years when he decided it was time to marry her and asked her to join him during a visit to Japan. Gene did not adhere to any particular religion and since they were in Japan they chose to have a Shinto-Buddhist wedding on 6 August 1969. They regarded this as their real wedding, but his divorce was not yet final and they made it legal with a civil ceremony on 29 December 1969

5. He tried to reboot Star Trek with the original cast in 1977.  The project was called Phase II.  The network abandoned the project just before filming was set to start.  The project was modified and turned into Star Trek: The Motion Picture thanks in large part to the success of Star Wars.

7. In physics a “Roddenberry” marks the distance traveled at the speed of light during a “traveler year.”  Using the theory of relativity scientists have determined that a “traveler year” is 70.7 % of a normal earth year or .707 of a light year.

9. Random personal fun fact: I used to have to go to the Roddenberry building on the Paramount Lot for work all of the time.  The building is very boring and has nothing indicative of its namesake other than a nameplate.  I was very disappointed.

10. He almost died in a house fire with the rest of his family when he was a toddler but the milkman came and woke them up in time.

11. He is the first television writer to get star on the Hollywood Walk of Fame.  (Random personal fun fact: when I lived in Hollywood my apartment was just off of the section of the Walk of Fame that has most of the actors from the Original Series so I walked all over them every day) 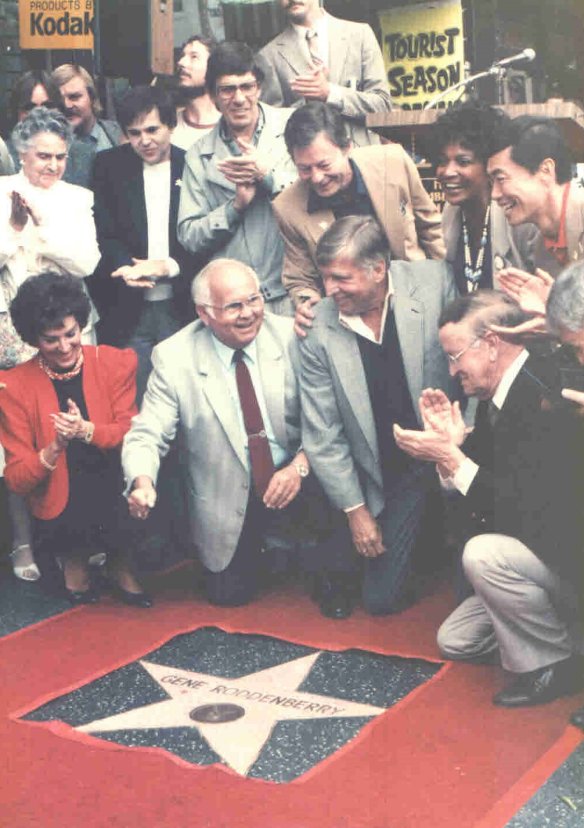 12. During WWII, Gene had a friend named Kim Noonien Singh; after the war Kim disappeared, and Gene used his name for some characters in the Star Trek series (Khan Noonien Singh from The Original Series and Star Trek II: The Wrath of Khan, and Noonien Soong from Star Trek: The Next Generation) hoping that Kim would contact him.

13. During WWII, Gene wrote a song lyric “I Wanna Go Home” which became popular among the other troops.

14. My favorite Gene Roddenberry quote: “Time is the fire in which we burn.”

15. In 1992, a portion of Rodenberry’s ashes flew and returned to earth on the Space Shuttle Columbia mission STS-52. On April 21, 1997, a Celestis spacecraft carrying a portion of the cremated remains of Roddenberry and 23 others were the first to be launched into Earth’s orbit aboard a Pegasus XL rocket from near the Canary Islands. On May 20, 2002, the spacecraft’s orbit deteriorated and it disintegrated in the atmosphere. Another flight to launch more of his ashes into deep space along with those of Majel Barret Roddenberry is planned for launch in 2012.

Gene Roddenberry created the greatest science fiction franchise of all time.  He didn’t set out to create a phenomenon or to inspire generations of scientists but his “wagon train to the stars” literally changed the world.  As a man he was far from perfect, but as a visionary he is unparalelled.  Countless inventions and advancements are a reality because he inspired people to “make it so.